Foster Application – why we do what we do!

Recently we have received comments from people about our foster application process.  I just wanted to take a minute and explain why we do what we do!

First, we must have all fosters complete the foster application.  This collects some basic information: name, address, household members.  This is required by the Department of Agriculture that we have record of our foster homes.  This application information allows us to review to make sure there are no breed restrictions in the residence area and the foster or individuals living in the home do not have any animal welfare citations.

Second, we check 2 provided personal reference and a veterinarian reference.  The personal references are good because it gives us additional insight into foster habits with pets.  The veterinarian reference is very important for 2 reasons.  We need to ensure there are no concerns with resident pets and that resident pets are up-to-date on vaccinations.  The pets we rescue have unknown medical histories much of the time, so we want to make sure our fosters’ own pets have the defense they need against potential illnesses.

Finally, the home visit.  We do the home visit because we want to know what sort of environment our pets are going into for their stay with STLPR.  Trust me, we are not looking to make sure the laundry is folded and the silver polished!  We just want to make sure the potential foster home will be a safe and comfortable place!

There were additional comments about if the pets are going to be put down, why not just get them placed with anyone willing to take them.  Unfortunately, in Missouri, pet overpopulation is a serious issue.  We want to make sure our foster pets go into home where they will be kept indoors (dogs only outdoors with proper containment and supervision), fed a healthy diet and monitored for any health issues that might arise, and if they do, take them to the affiliated vet asap! Our region has been plagued with individuals ‘adopting’ pets off of Craigslist or signing up to foster with rescue organizations, then selling the pets to laboratories for testing.

Thank you for understanding our process so we can safely rescue the pets in need!

Visit our foster page for more information or to find out how you can become a foster. 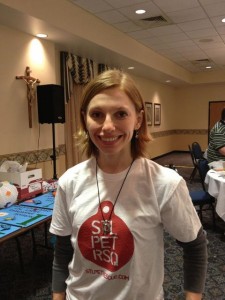 To order, please fill out this form! 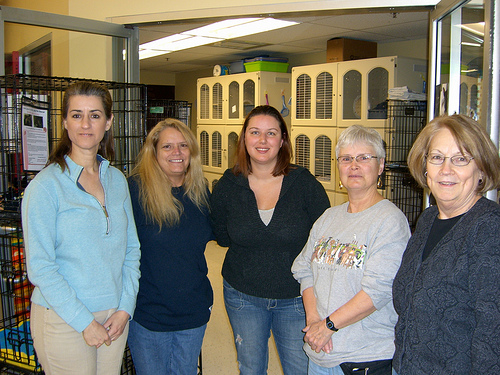 If it had not been for Jackie Koerner and a timely phone call from Adel Petterson, St. Louis Pet Rescue (STLPR) might never have been created.

In March 2009, Jackie heard that Dr. Laura Ivan, of Ivan Animal Hospital, had suggested that there was a significant need for a new rescue group in the Jefferson County-Fenton area, and Dr. Ivan offered to be the group’s veterinarian. It was just days before the first planning meeting had been scheduled, and Jackie, already a volunteer in an existing rescue group that was having what she referred to as “drama and gossip” problems, asked to be included. She and her husband ,Chris, went to the first planning meeting. “Eight people attended, and duties were assigned,” Jackie said, “but, come May, no one followed through, and all noted they would be too busy to run a rescue.” But Jackie decided that the need was so great that she would just go it alone. “I filed the paperwork and started fundraising to fill our vetting account at Ivan’s,” Jackie added. But just as the group became incorporated, Jackie discovered that someone had already spent the money in the account at Ivan’s. ”We hadn’t rescued anyone yet,” Jackie commented. Dashed by this,” as well as negativity coming from a fellow rescuer, “I gave up,” Jackie said. “I said I was going to allow the business filing to lapse.”

But that’s where Adel Petterson came in. Adel, then volunteer adoption coordinator for Jefferson County Animal Control (JCAC), a high-kill shelter, called Jackie in October 2009. Adel said that no other animal rescue group was rescuing animals from JCAC due to funding or space issues within their rescue groups. She urged Jackie to reconsider and emailed her photos of the shelter animals that had little hope of survival at the kill shelter. “I looked at the pictures and decided I would [continue with the rescue],” Jackie said. “I went down and pulled two dogs and a cat. Choosing was so hard, seeing so many faces I couldn’t save, so I started advertising for fosters, and word spread.”

One of the first to respond was Barb Vanderbeek, who had already been a volunteer animal rescuer for more than 7 years and who had previously worked with 3 other local animal rescue groups. Barb was drawn to the new group “because of their strong effort to save animals from JCAC,” she said. Barb serves as a cat foster and fosters mostly adults who would otherwise be euthanized. “I have saved a lot of kitties from certain death because of St. Louis Pet Rescue,” she emphasized. 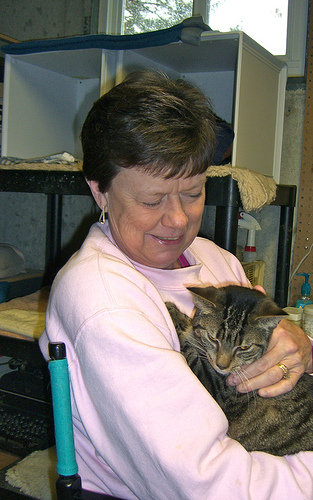 “Barb is a leader in the rescue group and is just about a full-time volunteer for the group,” said Carol Schmidt, a volunteer cat foster who joined the group in April 2011. “Barb taught me almost everything I know about cat rescue, and she’s been an awesome mentor,” When Carol switched from fostering dogs to fostering cats with a previous animal rescue group back in 2007, Barb was that group’s cat coordinator and explained everything to her one step at a time, talked her through new experiences, and showed her the ropes. “I’ve followed Barb from that first group to a second and, now, to a third, St. Louis Pet Rescue. Barb is, without a doubt, the most fabulous cat rescuer in the area. She knows her stuff, and she is devoted to the animals,” Carol said.

Barb urges more animal-lovers to help homeless animals: “If everyone reading this would foster just one, we could save a lot more.”

Another person to contact Jackie was Nickie Johnson. Nickie has been both a dog and cat foster for STLPR as well as a transporter, and she also answers and returns STLPR phone calls. In October 2009, Nickie said she answered Jackie’s Craiglist ad to be a foster. “I agreed to foster one kitten, but my first ‘one’ ended up being two kittens. . . . Then I took in an owner surrender Pit Bull, and, well, the rest is history,” Nickie explained. Prior to joining St. Louis Pet Rescue, Nickie had volunteered for Open Door Animal Sanctuary in House Springs and even now tries to help out another group “as much as I can.”

“Sometimes it’s a struggle seeing all the animals that you can’t save, but every time I see someone walk away with the perfect furry companion in their arms, it’s all worth it,” Nickie said. Animal rescue means “just saving one at a time,” she added.

“I’m asked all the time, ‘How do you do it? How can you go to the shelters and see the animals and know you can’t save them all?’” My answer is, ‘How can you NOT do it? How can you know about all the animals and do nothing to help them?’ Nickie said. “Sometimes all you can do is spend some time holding them, feeding them extra treats, petting their heads, and giving them soft blankets. But it’s something . . . and it’s important, no matter how small, to make an animal feel loved. It’s hard and tiring at times, and all of us need to take a break now and then, but in the end, I can’t imagine NOT being part of a rescue family. And this is what STLPR is – a family!” 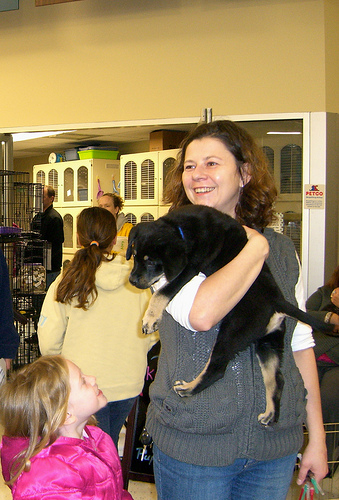 And don’t forget Adel. Adel, too, in addition to her volunteer work at JCAC, started helping the new group by Felv-Fiv-testing its prospective fosters at JCAC, transporting, and helping with adoption events. She then also became a foster mom. And in her dual-volunteer roles, Adel has become a leader for STLPR and was named Shelter Volunteer of the Year for 2011 for the State of Missouri for her invaluable contributions at JCAC. Referring to her ever-increasing involvement with STLPR, Adel explained, “I like the people in the group, and I like that they’re helping the animals at JCAC.”

A nurse by trade, “Adel is incredibly knowledgeable about and absolutely excellent concerning the medical aspects of cats and dogs,” Carol explained. “She’s our go-to person for all things medical.” But her expertise does not stop there. “Adel is involved in every aspect of the group’s work, and she’s become an awesome leader in the group. She works full-time as a STLPR volunteer and leader, and she works full-time as a nurse at Mercy; she devotes time to JCAC to help out there, and I have no idea how she does it all. But ‘amazing’ is the only way I can describe Adel and all that she contributes to the group, in her career, and to animals,” Carol emphasized.

And “amazing” just might also be the word to describe how the St. Louis Pet Rescue “family” has grown since October 2009, when Barb, Nickie, and Adel were among the first to step forward to help. Soon, “many others joined to support the effort,” Jackie explained. “People really liked the idea of a drama-free rescue group, being allowed to pick their own foster pets, and joined in.” Now, there are a couple of dozen cat and/or dog fosters, Monday through Friday cage cleaners for the Cat Adoption Center the group is in charge of at Gravois Bluffs Petco in Fenton, a few volunteers who concentrate on leading the fundraising effort, and some general all-around volunteers who assist when available.

Looking back, Jackie summarized, “The past two years have been a whirlwind, and I have met so many talented, positive-thinking, smart women – and a few men, too! But look at what a bunch of smart women from various backgrounds can do!!! I mean, we have saved about a thousand pets in two years! That’s incredible – but we all did it!”

And think of all the happy pet guardians and equally happy cats, dogs, kittens and puppies who found each other during those 2 years of adoptions! Most of those then-homeless animals would have been euthanized if Jackie had not been convinced to go ahead with St. Louis Pet Rescue through that all-important phone call from Adel!